Free US shipping on all products 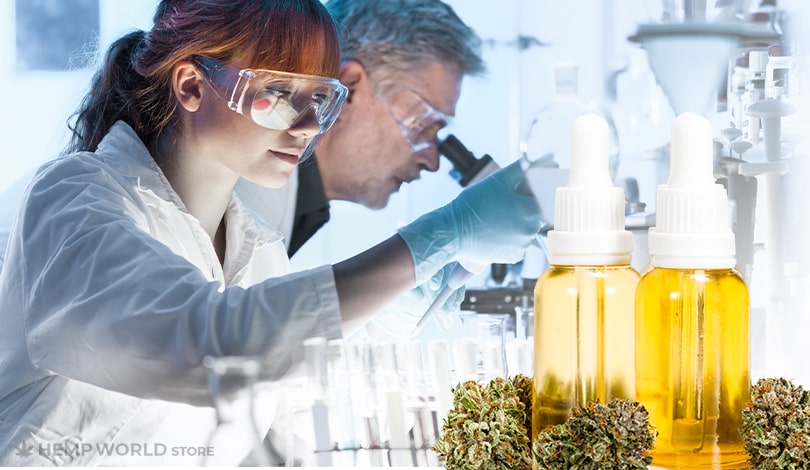 While cannabidiol is now a market worth billions of dollars, we are yet to derive enough information from Science and CBD. Proponents of the cannabinoid are in little doubt that it has the potential to alleviate a host of problems.

To date, the prohibited status of CBD means there is a lack of clinical trials. The passing of the Farm Bill of 2018 into law should change all of that. An increased level of research will surely help unlock some of the mysteries of CBD and other cannabinoids and terpenes.

Cannabidiol is one of the fastest-growing trends in the world in terms of popularity. Despite this fact, there is a relative lack of high-quality, reliable CBD information. With so many brands, there are more than a few interested in making money above offering value.

What makes it even more complicated is that it exists in a largely unregulated market. The truth is cannabis science as a whole lag behind the hype. We don’t know whether the therapeutic benefits of marijuana outweigh the risks.

CBD laws are not as clear cut. Even so, one would hope that research into it, and the dozens of other cannabinoids, becomes more prevalent. At present, scientists are still not sure precisely how CBD works in the body. Here is what they have learned so far.

How Does CBD Work?

Dr. Roger Adams discovered CBD at the University of Illinois in 1940. Dr. Raphael Mechoulam was among the researchers that identified the compound’s stereochemistry in 1963.

While one could write a book on how CBD works, it boils down to its effect on the endocannabinoid system (ECS). In 1992, Dr. William Devane and Dr. Lumir Hanas discovered an endocannabinoid called anandamide. They later found 2-AG and other endocannabinoids. In this pursuit, the scientists uncovered a hitherto unknown molecular signaling system.

The ECS is a network of 5-HT receptors that play a role in maintaining ‘balance,’ or homeostasis in the body. Homeostasis impacts appetite, and various other factors. CBD interacts with the ECS’s cannabinoid receptors, better known as CB1 and CB2. The human body produces cannabinoids naturally. When you add the likes of CBD to the mix, it potentially increases the efficacy of the ECS.

You can find CB2 receptors primarily in a few neurons and immune cells. CBD does not bind directly to these receptors. Instead, it interacts indirectly and influences a variety of ion channels and non-CB receptors.

Cannabidiol is still under huge debate when it comes to its effects. However, many people claim it has made an impact on their health. Here are some examples.

There is quite a debate on the merits of full-spectrum CBD against those of CBD isolate. The landscape is always changing, but the comparison still remains relevant.

One debate is that the various metabolites and related molecules significantly increased the activity of endogenous cannabinoids, including 2-AG and anandamide. They suggested that it helped explain why botanical drugs offered better results than isolated ones.

As the name suggests, the CBD in such products is isolated from the rest of the compounds. In most cases, CBD isolate products are up to 99.9% cannabidiol. A lot of people still believe that cannabinoids such as THC and CBN offer no therapeutic value. As the quality and quantity of research improve, we will learn more about the benefits of lesser-known compounds.

One advantage you get when using CBD isolate is a complete absence of THC. However, CBD products derived from industrial hemp can only have a maximum of 0.3% THC. If you believe in cannabidiol above other compounds; however, an isolate makes sense.

The Life Cycle of Phytocannabinoid Production

Cannabis terpenes are compounds found in plants and insects. The marijuana plant alone has more than 200 of them. The most abundant terpenes in hemp and cannabis include myrcene, limonene, linalool, humulene, and beta-caryophyllene. You also find them in fruits and herbs, and they have potential therapeutic effects of their own.

For instance, you find limonene in citrus fruit and myrcene in balsamic and herbs. When you add them to the cannabinoids in cannabis, you could increase the efficacy of any full-spectrum CBD product.

You should find both full-spectrum and isolate products available from most online brands. But, be wary about the price difference between the two types. As CBD isolate is only made up of cannabidiol and it has to undergo more intense extraction, the price is often very high.

Stages of the Plant

It is best to divide the growing cycle into three parts.

The first step involves germinating the seeds. It takes 5-10 days, and seeds need around 18 hours of light each day. The seedling stage requires the same amount of light and lasts 2-3 weeks. During the vegetative stage, the plant truly begins to grow. This period can take 3-16 weeks. The broad range depends on various factors.

At this point, the young plant produces a variety of cannabinoids such as THCA, THCVA, CBDA, CBGVA, and CBCVA. In each case, the ‘A’ relates to the cannabinoid in its acid, or raw, unheated state.

By the flowering stage, the plants only need 12 hours of light each day. It is the final stage of growth and is when the resinous buds develop. The plant produces cannabinoids such as THC, CBD, CBC, CBG, and CBDV.

Harvesting the crops late means they produce cannabinoids such as CBN and CBL that shut down growth. The process ends seed production and effectively sends the plant to sleep.

The Science of CBD

There is still a lot of work to do to uncover the full story with regards to CBD science. Research to date shows that CBD has an indirect effect on our body’s CB receptors. It also impacts our ECS somewhat, which plays a massive role in regulating our physiology. The more we know about CBD oil science, the better. Hopefully, we will reach a stage where guesswork is no longer a significant part of the equation.

How to Extract CBD

By now, many people are aware of CBD and its potential benefits. You can find this compound in the cannabis…
Read more
Blog
0 15

CBD: How Much to Take?

Trying to figure out the perfect amount of CBD for yourself can sometimes feel like an impossible challenge. Unlike regular,…
Read more
Blog
0 15

If you are new to CBD, then you may have a lot of questions when it comes to the basics.…
Read more
Blog
0 15

CBD oil has taken the world by storm. Almost everyone has heard of it now, even if you have just…
Read more
Blog
0 15

CBD Oil Side Effects: Are They Concerning?

There are a few CBD oil side effects that may impact how and when you use it. Adverse reactions include…
Read more
Blog
0 15

CBD oil Near Me: Finding Great CBD Oil Without the Hassle

If you’re wondering where ‘CBD oil near me’ could be, you’re on the right track to finding great CBD oil.…
Read more
Blog
0 15

Science and CBD: What Does Research Say About the Cannabinoid’s Benefits?

While cannabidiol is now a market worth billions of dollars, we are yet to derive enough information from Science and…
Read more
Blog
0 15

How Long Does CBD Stay in Your System?

For those that first get started with taking CBD oil, one of the earliest questions that most people begin to…
Read more
Read Blog
​This website uses cookies to ensure that we give you the best experience on our website. Read moreAccept